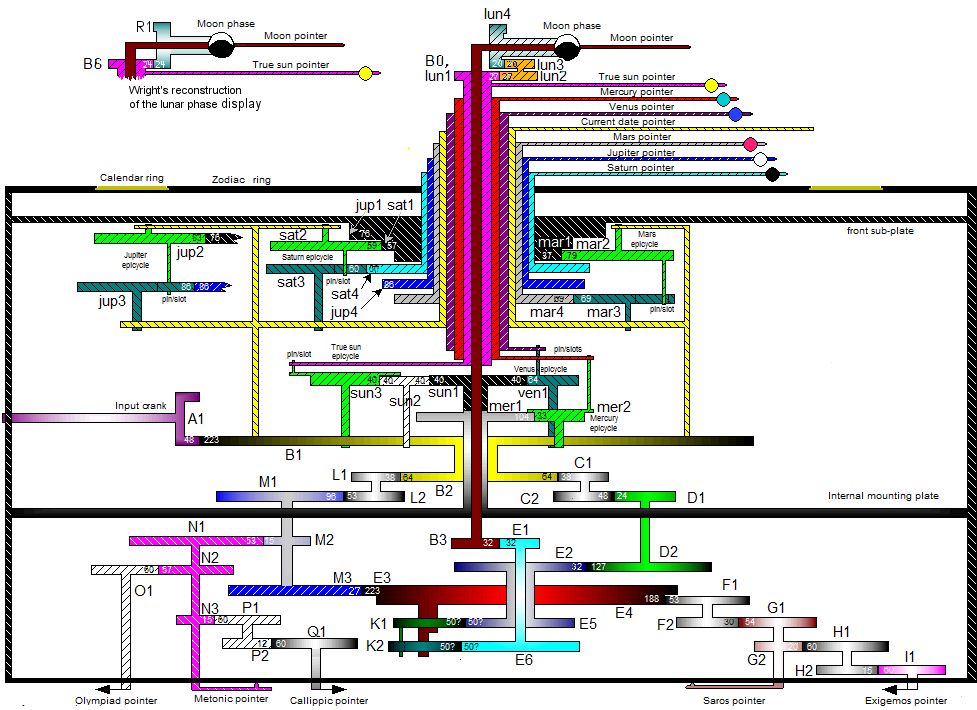 A schematic representation of the gearing of the Antikythera Mechanism, namely the true sun pointer and pointers for the planets (Freeth and Jones, 2012).

“The revival of magical beliefs is possible today because it no longer represents a social threat. [...] Astrology too can be allowed to return, with the certainty that even the most devoted consumer of astral charts will automatically consult their watch before going to work.”
Silvia Federici, Caliban and the Witch

It’s easy to make a case that we live in Millenarian times. The belief in the coming transformation of society often relies on a cataclysmic event, or rather it relies on an event that makes the prior world not only unlikely, but impossible, to inhabit. In the last century, we’ve seen similar narratives come and go, with the continued threat of nuclear annihilation and Y2K’s easy passage. The pathology of the world ending at any instant (1945-) is very different from its slow uninhabitability (1970-). Yet we live in both.

To navigate the weirdness that consumes contemporary life, you might hear someone frame a current event simply as a marker of “this point in the timeline.” For many, the elections of the last half-decade could be underwritten by a simple intermission: this is simply the timeline we’ve been given, and it’s the worst one.

The end of the world often collapses into synonym with the end of time. It signals that we simply can’t imagine a moment that resembles its uninherited and discontinuous moment after. So while the notion of directional time intrinsically suggests its potential end, Millenarian thought assumes its place as simply one expression among many of the medium of time. Key, however, in the distinction between the threat of the end of the world and the end of time, is the differing means and ends that utter their coming. Apocalyptic Millenarianism doesn’t ask individuals to embrace a cosmos, but to commit to a single, unidirectional timeline. The sudden cancellation of the future holds little ground, and its declarations should be met with suspicion—even when they invoke crises that cannot be denied—because they don’t give us worlds.

Along with whispers and clearer annunciations of the end of worlds, we are witnessing a new articulation of the seasons. This has been the warmest, brightest winter I’ve experienced in Berlin yet. While the disappearance of difference will gradually, and then suddenly, lend way to extremes, I'll probably never learn to enjoy someone telling me to embrace “Scorpio season.”

When I was eleven, my aunt told me I could choose any books at the Barnes & Noble. Coming away with a Graham Hancock book on Egypt and Astrology for Dummies, my timeline became at least partially, faultily fated. Having studied the stars from a young age through a $13.99 book series that includes other classics like Sales Management for Dummies, I was fascinated by how planets and stars stood in aspect to each other. The tyranny of collapsing Hellenic-tradition sun signs into singular adjectives for short seasons and personalities will not satisfy me. Still, astrology can be seen as an art of the quality of time: seasonal tailwinds and shifts in soil chemistry, influencing what can grow. Another way to say this, is that astrology seeks to articulate and actively craft how time’s disposition and affordances are governed, taking the event more than the self as its subject.

In astrological communities, from Vedic to Hellenic practitioners, debates on method and upcoming configurations occupy the core of the conversation. One of these configurations that convey a shift in the quality of time occurred in mid-January. Following roughly 33-year synodic cycles, Saturn conjunct Pluto also coincided with the beginning of WWI and, according to most forums, ushered in neoliberalism at the start of the 80s. Another deeper, it is said, more fundamental shift in the quality of time will occur later this year. Jupiter conjuncts Saturn every 20 years, and for approximately 200 year cycles, Jupiter-Saturn conjoin in signs of the same element, giving us two centuries of Fire, Earth, Air, or Water in turn. Referred to also as triplicity cycles, our current cycle phase initiated in 1802 gave us over two hundred years of Earth, in which we saw global industrialization and extraction, from rare earth minerals to fossil fuels. In December 2020, the Jupiter-Saturn conjunction will take place in the sign of Aquarius and fully initiate the next two centuries of Air.

Astrologers speculate differently on how we’ll meet this predicted change, but it is at least certain that the cycle will continue and recur. Though possessing its own Millenarian currents, astrology is another expression inherent to time—one that precludes its singular end.

With the increasing number of astrology apps as social platforms and single card tarot readings as self care, I keep in mind Silvia Federici’s passing remark about the efficacy of the cultural acceptance of magic in the historical present, “astrology too can be allowed to return” as long as we still consult our watches before heading to work. The quip calls into question the disjunction between magic’s appearance and its inhabitation, as practice resistant to enclosure. It also, for me, highlights how there seems to be little consensus on the contemporary fulcrum of protest, refusal, and political change, especially intergenerationally. If the prior two centuries “of Earth” gave us increased industrialization and extractivism, what becomes the new resistant yet affirmative terrain as the former becomes entirely exhausted? Perhaps one theory of political change lies in a transformation of the quality of time: not whether, but which, and whose, watches we consult. This is not a historically new idea to reject or rethink time as an alternative coordination tool, and one that is not principally dependent on material conditions. 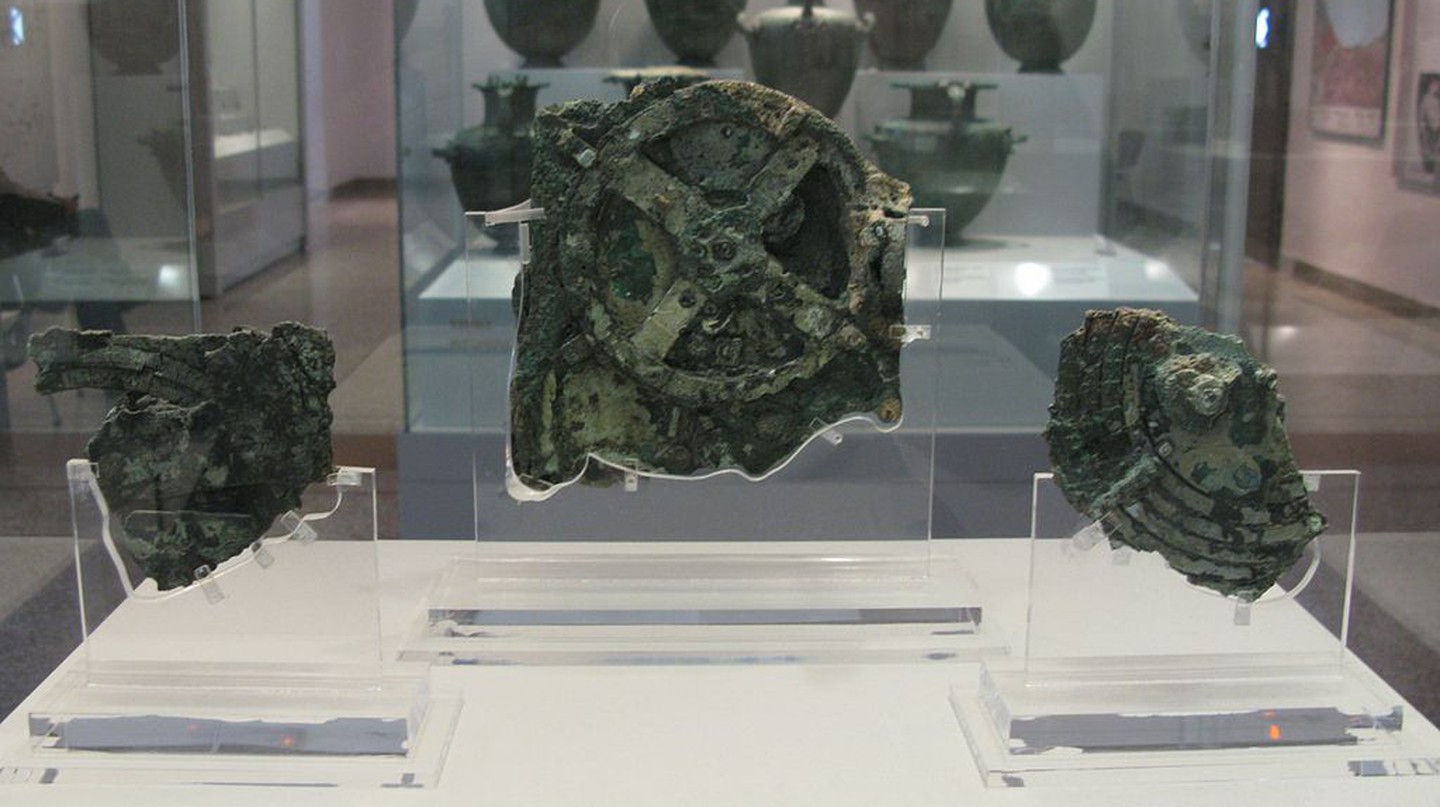 An early time machine, the Antikythera mechanism was found by divers off the coast of a Greek island in 1901. The mechanism is dated between 200 B.C. and 87 B.C. and considered by some to be the first analogue computer known so far. Reconstructed from 82 fragments, the mechanism itself consists of 37 gear wheels, which followed the movements of the Sun and Moon throughout the sky, correctly accounting for the Moon’s irregular orbit, and calculated eclipse cycles. Inscriptions on the gear wheels reference the Saros cycle, Metonic spiral, and the zodiac. The mechanism not only measures astronomical time, but its gear system actually utters a complex, mechanical grammar of correspondence to orbiting bodies, already replete with horoscopic narratives. Correspondence was deeply tied to the practice of early astronomy. From the association of emerald gems with Mercury to recognition of planetary hours, astronomical measurement was not separate from but also an aesthetic task, which cultivated incredibly resilient symbols.

Today, a dominant experience of time is translated from orbiting planetary bodies to corresponding regulation in digital machines, which keep our devices in constant, unprecedented sync; mobile devices are an expression of the medium of time that enforces its serialization. There was a possibility for our devices to derive their initial logic from elsewhere. Rather than skeuomorphic telephones, these portable circuits, liquid, and glass might have become the explicit wayfinding tools of earlier designs for companion devices. 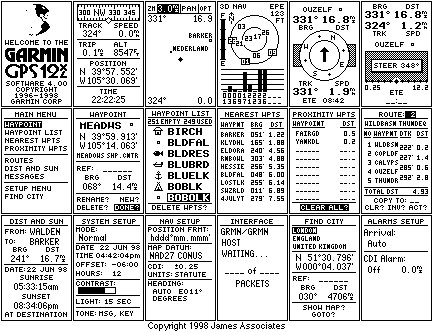 Instead of regressing into nostalgia for surveillance prototypes, is it still possible to think through a new logic of companion devices? Their connection rhythmic over only call and response, through alignment of time or its disappearance altogether: the Great De-Sync.

Ever dreamt of an opensource watch U can customize with PYTHON. It would let you create YOUR own communication LORA apps, with on-board MESH, open-source technical specifications & 3D plans if you want mods? Where no-one but you can control the obsolescence.We are making it now! pic.twitter.com/vr177rVXRB

A New Time Machines Working Group assuredly wouldn't inherit a limited notion of machine correspondence, or embrace it too abstractly either. Machines have a talent for producing cultural patterns around their use, and practices also have an ability to produce machines. The practice of perpensation horarum is the mental articulation of the passing of the hours, a contemplative act, in which time and life become nearly coincident in their experience. This habit was central to early Franciscan monasteries, which grew into institutional arbiters of time and memory in their own right. Practices themselves—of apocalypse, astrology, and atomic clocks—all produce different and coinciding time machines; those which are eternal, correspondent, and serial.

The New Time Machines Working Group's resolve would lie in its ability to navigate varied, novel, and multiple expressions of time as a medium. Its experimental research themes might include the viability of time independence movements, how to heal disjointed, co-located timelines, or practices that produce machines for non-linear time. The Group would rest, primarily, on the hypothesis that if today's time is made by machines, then we may need different machines to remake time.